Nothing but the darkness

Last night was horrible. It took me ages to get to sleep. I was so agitated, I was exhausted but I just couldn’t relax! Was so frustrating. I slept in the end, don’t know what time. But when I woke up I felt as though I hadn’t slept.

I got up early anyway because Sammy pup was being dropped off. I went back to bed for a bit, was still a bit restless but I was tired. Managed to sleep for a bit. Just sat chilling watching tv with the animals surrounding me.

Got in a argument with my brother. It started with him texting me about wanting to go out with fox and I said no because I’m not feeling well (will explain why in a bit) and he said oh one day this year I will get a yes! A proper DIG at me I felt. Yeah I say no to him a lot, one because I don’t feel well and two because I don’t really like spending time with him as he talks to me like shit. So he just went on and on about how I never see the family, bringing his kid, bump and my little cousin into it! Which was a low fucking blow. But the truth is we aren’t a close family, they only see him because they have no fucking choice, he forces himself upon them. And yes when I feel well I spend time with my friends, I don’t get why that is so freaking bad. But yeah he was calling me selfish, calling me a cunt all sorts. I fucking HATE him, he always makes me feel like I’m such a bad fucking person! He’s deleted me and made his gf do the same. I don’t hang out with my family because non of them even try to understand me and my issues. So why should I spend my time with people who don’t get me? Harsh but its a waste of time. I feel like they don’t want to know and the feeling is mutual so why make everyone unhappy? so yeah whatever I am a bad person… as always. I sent my mum this message – Can you explain to your son that I’m not always physically and mentally well enough to go out at the drop of a hat! I am sick of his verbal abuse. Taking it to a personal level saying things like non of the family like me, calling me a cunt!! This is why I don’t want to be around him, he’s a nasty person and is always only out for himself. Have I had a reply? No! no surprise there though, mummies little golden boy!

So yeah…. I am dealing with that bullshit and physically and mentally feeling like shit! My legs have been aching so bad all day despite pain killers and a hot shower. I have no idea why they hurt so much 😦 I managed to eventually have a shower, do a load of laundry and take the dogs for a wee.

I’ve just been trying to relax today, so just been playing fb games and chatting to Z 🙂 Oh and doing laundry.. I feel better for just relaxing. But I still hurt quite a bit, which sucks. I took the dogs out again earlier, which was nice. Oh I changed up the cats track 🙂 looks so fun. Hehehe.

I’ve got someone coming to get the dog litter tray that I am selling. Fox has never used it so made no sense to keep it. So getting a fiver for that. 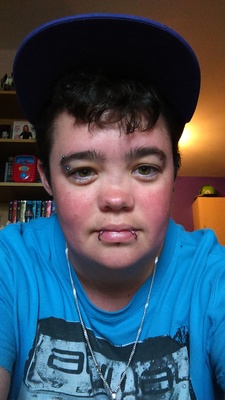 Looking fresh faced! Camera on my new phone is amazing, so sharp. Even the front camera. 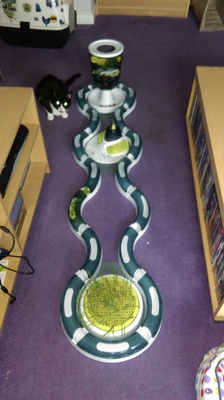 Cats toy 🙂 They are so spoilt.

Going to try and maybe have a sandwich.

2 Comments on “Nothing but the darkness”