Well I managed to get to bed at just gone 1 am. I did my injection in my thigh, which hurt like a mother fucker! lol. Went into the bedroom, put the heating on and turned on the tv and xbox. Pulled the covers over the bed so if the dogs are a bit wet when we get in, they don’t get the inside of the bed wet. Sorted out my hot water bottle and picked a dvd to watch in bed and I chose Monsters Inc 🙂 Went and put my water bottle at the end of the bed, mainly use it to warm up my little feet. Got the pups ready and took them out for a quick walk and wee.

Got all snuggled in bed watching the film and playing on my tab, although I didn’t stay up for long, I was really drowsy. But I slept really well 🙂

Had about 8 and a half hours sleep again, so woke up about 10 am. Still felt pretty low and unmotivated…Didn’t want to do anything. So I fell back to sleep again on the sofa till midday.

When I woke up I had s choice to make. Either I got my butt off the sofa, cleaned up and bit and went out and did something, or to stay in all day and feel even worse. So after some back and forth chatter with myself, I decided to stop be so fucking lazy and unmotivated and to get my backside into gear and not to waste yet another day. Yeah I gave myself a good talking to lol.

Didn’t quite know where to start, what I was going to do….I just stood for a bit, until I came up with a plan that was in order, made sense and was something I wanted to do.

Then I cleaned out the litter box, decided I was going to do the bare minimum so I left the poop on the balcony for another time. Put all the dog toys in the box and hooverd up. Just straightened everything up. Boom flat sorted!

I got myself showered and dressed, wore my cuff jeans today, so I could wear my boots and I find the cuff jeans keep me a little warmer. I got my backpack ready, packed a spare jumper for me, foxy’s blanket just in case she got really cold, a drink for me, treats for the pups and scrappy’s ball and ball thrower thing. Oh and made sure I had spare pain killers too. I took pain killers before we left, to tide me over for when we are out. I wrapped myself up in a nice thick jumper and a hoodie over the top, I had my boots on, my fingerless gloves…I hate full length gloves they make me feel weird, stupid I know, but I don’t like the feel on them and I had my beanie hat on to keep my ears warm.

Got the pups ready to go out and made sure I had poo bags…..well nappy bags but same thing lol, they are way cheaper the poo bags.

We were off, we left about 2 pm. Walking through the high street took a while because it was busy and people stopped to say hello 🙂 Hopped onto the bus and we were on our way to Bournemouth beach.

Walked through Bournemouth gardens and scrappy was just bursting to get off and run, he was pretty much dragging me along. He may be small but he’s strong. My lil foxy was just trotting along with me, she’s such a lil princess. Scrappy hasn’t been on a proper sandy beach before and as soon as we got there I let him off and zoom! He was gone, running all over, saying hello to everyone. He just went crazy. Foxy just continued to trot along slowly, but she did go say hello to lots of people. I was played fetch with scrappy, what else would that boy be doing lol. He was running in and out of the waves that were crashing onto the beach. He didn’t go right out for a proper swim, he would have been swept away. But he doesn’t mind getting wet and he was soon covered in sand as well. We walked up and down the beach, didn’t go too far though as I knew how ever far we walk, I have to walk back that far, so we stayed within the second groyne out from either side of the pier. That was a comfortable distance for me to walk to and from. It was such a lovely day and I got some really amazing photos 🙂 I think we were out for about an hour and a half. Which was more then enough time. Foxy was getting cold and my hips were starting to feel stiff. Scrappy however could have stayed forever, that boy just doesn’t stop!

We walked back through the gardens to the bus and luckily one just pulled up so we didn’t have to wait. It was nice to sit down in the warm. Half way through the bus trip scrappy was sick…glad he was sat on the floor and it was just water. Thankfully I had tissues, so I moped it up and put it in a poo bag. He was sick again and again it was just water…He’d drank too much sea water, that’s all it was. So cleaned it up and the bus was just coming up to the hospital, so I decided to get off, just in case he was going to be sick again and I am SO glad we got off when we did. Started heading home and yep I guessed right, because he threw up a lot…it was watery and sandy..gross! walked a bit more and he was sick again. My poorly boy so horrible to watch, but he was happy enough walking along. He probably felt better for being sick.

Got home and yeah there was a reason I left the heating on…ah it was so nice and warm 🙂 scrappy had a drink and threw up again, it was just sand, so gross! But that was the last of it, that will teach him to drink sea water. But partly my fault for not bringing him clean water to drink, he gets really thirsty racing about, so that is a lesson for us both for next time we go there.

Sat and relaxed for a bit, had a Pepsi. Foxy curled up on the sofa on her blanket, I think she was happy to be home and warm. Scrappy however just went and brought me his ball we use just indoors….Yeah I just looked at him and said not a chance my boy! I need to rest for a bit.

I remembered I didn’t have anything out for dinner. I wasn’t really hungry, but I needed to eat. Even though I had breakfast and lunch today, I felt like I hadn’t eaten anything at all…its weird. But like I keep saying I think my body is still getting used to not eating so much. Its not used to being full and bloated all the time. Anyway I went down to asda, I got myself some microwave chips and smoked haddock, some sweets and treats for the dogs. Didn’t ended up eating the fish, just the chips. The fish will keep till tomorrow though. Nice easy, healthy-ish dinner.

Haven’t done much this evening, just had the crime channel on, played fb games, uploaded my pics to laptop and fb. Nearly 11 pm and I think I am going to head to bed after I have done this. I’m pretty tired after all that fresh air.

Not a solid plan for tomorrow as of yet. On fb this woman posted a picture of some dog stuff and I really like two all in one coats. So I am going over near where she lives at some point tomorrow for foxy to try them on. I’m hoping they fit as they are a bargain for £2 each. I won’t be far from the beach, so I may take them down there again if the weather is still good. And by that I mean not raining. Just haven’t sorted out a time with the lady yet, she just said to tell her when I am ready to leave. So that’s good.

Mood is feeling much better then yesterday, not feeling as dark and low. Still a little low, but that’s ok. I’m really glad I chose to get up and out, I really needed it, it helped and the pups loved it so that made me happy.

Pain has been manageable today, kept up on taking my pain killers. I’ve just been really fatigued, sleeping more then usual. That maybe the low mood, I’m not sure what came first.

Some pictures from today 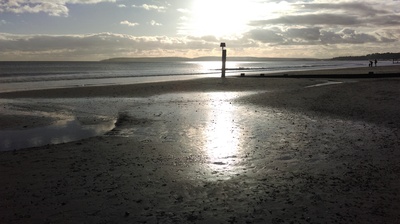 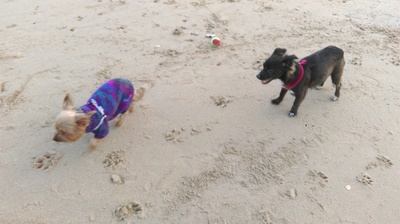 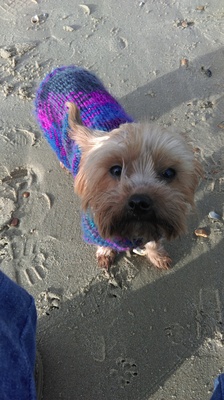 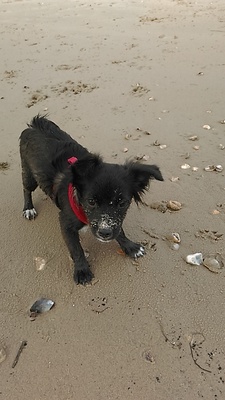 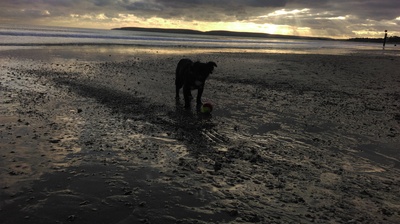