I’ve had another nice relaxing day 🙂 and I feel totally recharged, it was something I totally needed it.

I started colouring in one of my pictures last night from my new Animorphia book and wow I love it, it’s so so cool! 🙂 entering this in the competition on the fb group again.

I slept well again last night, woke up had some breakfast and chilled for a bit and then went back to sleep until 1 pm lol! But I totally needed the sleep, I knew my sleep would get back on track again.

Had a shower, covered myself in deep heat, got dressed and took the pups out for a bit.

This afternoon I booked my ticket for London 😀 eeeeeek! I am so freaking excited but I did it while I had enough money to do it, so I don’t need to worry about it.

Spent a few hours colouring in more of my fish picture in my new book and wow I so love it so so much 😀 Can’t stop looking at it lol.

Thought I would write a quick update before I gotta get ready to go out, to the trans* group social.

But I am feeling good, definitely needed this time out to myself. Looking forward to seeing everyone tonight 🙂 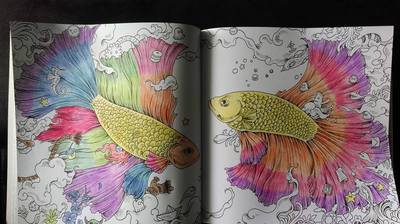 My picture so far 🙂