Sometimes all you can do is just BE :)

I don’t know where to start today, I am just looking at the screen hoping to be inspired to write. I think it’s a bit of brain block/brain fog.

I decided to go to my trans group social last night, which was nice 🙂 and the pups always love seeing everyone. I think I needed to socialise and get out of my head for a bit and come home feeling a bit better then when I went.

WOW did I sleep well last night, I slept for a good 9 hours but I must have needed it. I was up for a bit and then slept again for a few hours until 12:30 pm. I so needed it though, I’ve felt much better for it.

All I’ve managed to do today is just be, I’ve felt too overwhelmed to do anything. But I am coming to realise that just being is totally ok. Yes I have my DBT skills and stuff but sometimes that just doesn’t work, nothing does. So I’ve just had to sit and be, which for me isn’t always easy because every time I feel down I feel like I should be doing something to turn it around. But by actually just sitting and being I have turned it around and I’ve not felt so exhausted today, as I’ve slept and I’ve just been without trying to do anything or be anything, which in itself can be exhausting.

I made some cakes this afternoon, I love baking but even more so now I have my stool to sit on so its a lot less tiring.

I went and had my haircut late afternoon, I just suddenly decided to go and get it cut. So I got my mohawk shaved back in, I love having the sides so short but I like having a bit to play with.

Had two showers today 🙂 but again with my stool it isn’t so energy draining now. I love having a shower again now, it’s enjoyable again.

All I’ve done this evening is take the pups for a wee and pick up my meds. I didn’t end up eating anything tonight because I didn’t want anything, I did have 1 meatball at lunch time, so I have eaten a bit today.

Just relaxing now, got the tv on. Waiting for a show called girls to men to start, which is about trans guys 🙂 last week was about trans kids and that was good, so really looking forward to this. All though I know this will kick off the dysphoria for me because these guys are like done with their transition and I am just wanting so bad to start my physical transition.

I now have two people that will be able to help me Thursday, so if one person can’t then the other can. So I am feeling so so grateful for that. All mother has to do is pick me up from hospital and drop me home. So I am not stressing about it as much now, I just can’t wait for it all to be over with.

Tomorrow I have my bitch jobs to do and laundry. I’m also going to try and take the pups for a walk if I feel up to it. I need to get my self sorted for Thursday, what I need to take and set my alarm and stuff. I need to be at the hospital for 7:15 am so I need to be up pretty early because I need to have a shower, take out my piercings and take the pups out for a quick wee. I probably won’t walk up there though, I’ll get a taxi. I am starting to feel a bit anxious about it now, even though I’ve had this type of procedure before. I suppose it’s natural to feel a bit anxious before being put to sleep. 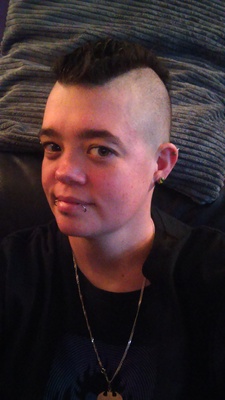 feeling fresh with my new haircut

← I hate gender dysphoria
ARRRGH! There are no words →

2 Comments on “Sometimes all you can do is just BE :)”