Living my life to accommodate an illness I hate

I don’t know even where to start 1 because I am SO tired and 2 because I have scrappy doodles staring at me, which is kinda off putting. He wants to play but I’ve already played fetch since I got home earlier, he’s so damn cute it’s distracting lol!

Anyway since my last post I don’t feel much better but well enough to go out and see people. I hate being stuck in, I get so bored and when I get bored it really effects my mood and makes me feel low.

Friday I was getting extremely bored by around 3 pm, but I felt too tired and weak to go out and do anything. Sometimes when I feel tired I just don’t know what to do with myself and I find it hard to settle down to do anything at all. But I eventually decided on making cheese biscuits, it’s time consuming but has a tasty result. I enjoy it as well, I’ve always loved baking and cooking since I was small.

After I had made my cheese biscuits I then felt much more settled in myself, I was still really tired but less restless I suppose you can say. I then was able to sit down and play Lego Dimensions and I played for hours. I love this game so so much! Cannot get enough of it. I get totally sucked into the game and lose track of everything, it’s such a great distraction and I played all evening. Such a rock and roll Friday night lol!

Saturday was good, L and the boys came over, although it wasn’t such a happy start as Harvey has been extremely naughty! So I had to have words again and boo licked and cheese biscuit and put it back and when I said that was dirty he kicked off at me, so they both went in a naughty spot! Lil sods. But eventually after they had calmed down and done their time outs we went to a kiddies play area.

It was great as this time Albert is older and big enough to do everything by himself, without having to follow him around and help him. So we just relaxed and chatted for most of the time, but to start with I did go in with boo and show him around, he soon went off and played on his own though…well until he came back for a drink and a person walked past in a Lemur costume and he said its a scary bear, he was so nervous and wouldn’t go back in until it had gone. It was so flipping cute though.

Man was it loud in there! Especially as it was a Saturday and there were about 4-5 parties going on as well. It was a bit of sensory overload for me and was a relief when I got out. I find it hard to concentrate and process things properly when I am in a situation where its loud, bright, colourful etc. I was ok but as I wasn’t feeling 100% it almost exaggerates it.

After we all came back to mine, so the boys could have their dinner before heading home. When they left I fell asleep on the sofa for about an hour but I so so needed it.

I tired to eat my child portion microwave meal but I couldn’t eat it all, I’ll come back to the subject of appetite soon. I still felt exhausted, achy and a bit under the weather. So I took the pups for a wee and then got us all snuggled up in bed and I watched the film Legend, which I cannot get enough of. It’s so good and they got paranoid schizophrenic spot on! A must watch.

Woke up feeling a bit better this morning, had a bit of breakfast and just chilled out. Got showered and dressed and took the pups out for a wee. When I got in I had some time to kill before going out to my friends, so I went for a nap for a hour. I definitely needed it, I just can’t get enough sleep right now.

I got myself on the train to my friends house, even though I’ve done this trip before, I felt so anxious. I just don’t like trains, they make me feel trapped and I am always worried about getting lost. This is going down in my Mindout Positive me journal as something that made me proud today 🙂

Had a good afternoon for Ravenoaks birthday, chilled out and chatted with everyone. Had some party food and even got cake!

Got dropped back to the train station and had to wait a bit for the train but that was ok, I’d rather be early then just on time.

The pups went insane when I walked through the door, scrappy cried and both were jumping all over me. Spent some time fussing over them and playing with them for a bit.

I did want to have a nap when I got in but I had other bits to do before chilling out.

So yeah that’s what I’ve been up too since my last post, it’s been good fun. I have struggled to get through it though, not because of my mood as that’s been alright. It’s been because of being sick on Wednesday and I’ve since struggled with my appetite…again.

I find it so hard just to stop over thinking it and EAT! I have such a awful relationship with food anyway, which goes back to childhood and being forced to eat dinner even though I didn’t like it or wasn’t hungry. I’m not a foody person with a big appetite.

I know this will pass in time, its just such an annoying set back after all the hard work I put into eating better and properly. Its just like I have to work hard to do anything in my life, even simple things like eating. I can’t just eat, or I can’t just do anything without planning, or pacing myself, or whatever.

I just wish things were a bit simpler for me and I wish I didn’t have to live my life accommodating an illness that I just despise having. Having Granulomatosis with Polyangiitis not only causes me all the physical symptoms that I have but it also causes me so much emotional distress. It makes me angry, frustrated, down, depressed..etc but I get no emotional support for it. I got diagnosed at the age of 15 years old with this massive life changing condition and I got no help and I still don’t really and that in itself makes me really angry. Justifiably so as well because as I said I have to basically have to live my life around an illness that I do not want and hasn’t improved since my diagnosis.

Anyway I have eaten more today then I have since Wednesday, which is good and hopefully this will kick start my appetite back up again, as I certainly need a bit more energy.

I’m not looking forward to tomorrow afternoon, as someone is coming over from Diverse abilities to help me start my appeal for PIP, I just know its going to be so stressful and I just want it over with already. I know I can sort this and I will sort this because I am entitled to this money, I’m not a faker. I’m just emotionally, physically and mentally utterly exhausted and this is yet another battle to fight. It’s a pretty unnecessary fight as well because of our government, they are making it impossible for anyone to claim disability benefits, as they simply don’t want anyone on benefits…We won’t go down this road too far or I will just wind myself up even more.

Before this woman comes over, I have to do the housework as right now its a complete pit lol! and hasn’t been cleaned since Thursday. I feel extremely stressed already about tomorrow, definitely lots of mindfulness and relaxation is needed to get through and after I will have to do something nice to de-stress, like take the dogs out or play on the ps3 or have a sleep lol!

Going to wrap this up now as I’m tired and want to get to bed.

So how do I feel right now? I’m emotionally, mentally and physically exhausted. I’m feeling stressed about tomorrow but I know I will get it sorted and win my case. But I do feel ok and that’s ok. 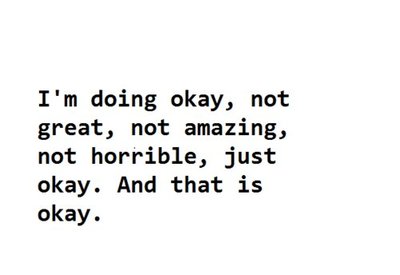 ← Another allergic reaction to yet another antibiotic
Beyond Exhausted →