I really struggled to get going this morning, I felt so so tired and felt like I hadn’t slept at all even though I’d had a really good nights sleep.

The flat was an absolute state and I really needed to get the housework done, not only because I wanted it done but someone was coming over to help me with my PIP appeal.

I literally had to drag myself around the flat to tidy up bit by bit and it took every ounce of the little energy I had to sort it out.

I then used my last bit of energy to have a shower and get dressed. I also took the pups out for a quick wee and a run, how I made it over the road and back I don’t know. I was running on empty by this point.

Sadly I couldn’t sleep right away, as I had a lady come over to help me sort out my appeal for my PIP (personal independent payment) She was really nice and we spent nearly two hours talking about my conditions. She said they that I should have been given a point for having a pill box! Not that it would have made much of a difference BUT it’s utterly disgusting that they did not write that down. Most things I said they didn’t write down.

Anyway she seemed quite hopeful about my chances and she thinks that if my docs write me some good letters that it shouldn’t go further then a mandatory reconsideration, which should take about 6 weeks-ish. I am really hoping that it doesn’t have to go further then this but I will be ready just in case I have to fight it further.

She said I have a strong case for the care component part of the claim but the mobility component part of the claim maybe a bit trickier purely because I’m not in a wheelchair and it’s hard to judge me pain, how far I can walk etc. But she said there is something I can do to help that part, which is to measure my step and then count how many steps I can take before I am in pain and or have to stop and do that for say 3 different days in a week and then she can do the maths and work out an average of how far I can walk and hopefully that will be enough to help with that part of the claim.

At one point we were talking about who cares for me, e.g a social worker..etc and I said no one and that’s not because I don’t want/need that kind of support but because it’s simply not available. I had a social worker, she saw me once and that was only to get my stool for my kitchen stool and shower stool. All the services are over stretched and have no time for people like me who appear to be capable or whatever. But I have to deal with my life by myself because I have no other choice, it’s such a catch 22 situation. It just highlights to me that I do have a lot of needs that are being met because I put an extraordinary amount of energy into every aspect of my life. But I do wish I had a social worker or whoever to help me with appointments, or sorting medications or just to talk too. I know that this kind of support would be invaluable for me, it’s just simply not available and people like me are slipping through the net and aren’t getting what they need and it’s so so sad to thing there are others like me suffering because of the lack of services.

Appointments like this always bring up so much for me and makes me think about my illnesses and how much it effects my life and it doesn’t make me feel good. I hate this illness so much but I wouldn’t wish it upon anyone…I won’t go on too much as I don’t want it to effect my mood any more then it already has.

Anyway the lady left just before 2 pm and I had just about enough energy to let her out and then collapsed into bed, where I slept until 4 pm…yeah I wasn’t tired at all..and I’m totally fit for work! lol

My friend H popped over for a bit to kill some time before an appointment, so that was nice to catch up with her for a bit.

I managed to eat dinner tonight, I had rice and my beef stroganoff and I managed to eat the majority of it as well. So pleased I could eat properly and hopefully I will be able to continue to eat well again. Tomorrow I’m making sausage and bean casserole in the slow cooker 🙂 so looking forward to that.

Went to the chemist this evening to pick up some medications that I had ordered last week. But my meds weren’t ready, usually when this happens it really annoys me because it’s either a cock up caused by the chemist or the doctors. Today however was different because no one has messed anything up, so the lady explained that my doctors surgery had said that they had taken me off their system and are in the process of putting my details back onto the system. The lady was a bit confused as to why they were doing it and why I was pretty much bouncing up and down lol! This means they are FINALLY changing my title and my gender and I will get a new NHS number, it’s only taken them nearly a year to sort this out. But that’s irrelevant now as it’s being done.

I cannot express how happy this has made me, even though its a pretty minor detail in the grand scheme of things. But because I am in a sort of limbo while I’m waiting to be seen at the gender clinic and I’ve had to fight for this as well, so it feels like a small victory! So yeah I am a very happy boy right now 🙂

How do I feel right now? I feel tired, I feel happy and I feel relived as well. I just hope everything with my benefits goes in my favour and it doesn’t take too long. 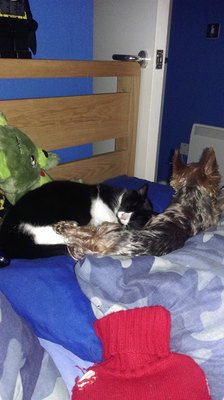 I woke up to this after my nap ❤ aw they are so cute ❤ Miss Marley moo and Foxy girl.

Right I gotta get myself ready for bed, I need my beauty sleep lol.