Days like today just reinforces my limitations of daily life. Yesterday was great fun but today I could barely drag my body around. All my anger towards this illness surfaces on days like today and I’ve got to try and “deal/process” it which is incredibly hard, especially as I’ve had zero emotional support surrounding my physical health issues.

Before I carry on I’ll have a quick update about the last few days.

Sunday – Didn’t really do anything just slept a lot, I was hurting from head to toe. I did go to my brothers for a few hours for dinner, which was nice. When I got home I spent a little time on the laptop but then spent the rest of the evening playing Lego Jurassic world.

Monday – I struggled to get going in the morning, I managed to drag myself around to do the housework and have a shower. Just in time for my friend to drop her boy over, for some boy time. We took the pups out for a quick wee, went and got some biscuits and then spent the rest of the time watching cartoons 🙂 which is a morning well spent in my mind.

In the afternoon I met L and the boys, went for a short walk. It was too cold to go far. They spent the rest of the day at mine, we played with the pups, watched Frozen and did some colouring. It was so much fun, I love playing with the pups an Albert. Harvey is much harder to engage with, as all he wants to do is either play on my ps3 or play fight, which he’s starting to get far to big for now. He’s nearly 9 and getting taller and stronger, he has no interest in colouring in, or anything where you have to sit and use your imagination. I really want to find something I can get him to engage with, as otherwise I feel like he’s a bit left out. He just ends up playing by himself in his own world, but it’s such repetitive play, just the same thing over and over every single time he comes round and even when he’s at home. Its just finding something that’s not play fighting or gaming related to get him to do something else. Its really difficult because when I ask him what he wants to do, he doesn’t really know. He does have potential to do whatever he wants its just unlocking it and finding him a hobby or a different form of play. Autism is complicated, but I will not be beaten and I will get inside his lil brain to unlock him. It fascinates me so much and I really want to help get him involved when we are all playing, I want to get him included but its hard when he won’t join in.

Anyway they left about nearly an hour before I was leaving to go to my trans group social. Which was good as usual 🙂

So back to today, I woke up at 8 am had a pee and went back to sleep until half 10. I still felt really tired and so achy, as I’d ran out of Tramadol and needed to pick my prescription up from the chemist.

I barely managed to get a shower and get dressed. I dragged myself across the road to let the pups run around, I just sat on the bench watching them. I just couldn’t walk around, my whole body felt heavy and slow.

Dropped the pups home and dragged my ass down to the shop to pick up my Tramadol and got a few other bits I needed. While I was in there, I suddenly felt this weird feeling in one of my fingers, if felt like it was about to explode…it was just a burst blood vessel. So I now have a very swollen and bruised finger..urgh.

I just spent all afternoon relaxing, I did try and sleep but I just couldn’t! Which was fucking annoying, I was tired enough for a sleep but I was just in too much pain. I couldn’t get comfortable, I couldn’t relax enough 😦 stupid painsomina.

Just been binge watching things I’ve recorded on sky, whilst playing fetch with Scrappy and the laser pen with both of them, also been playing with the cats. I just sit on the floor and they all surround me 🙂 I love it. They make days like today a bit easier to deal with…well along with some cookies!

I don’t have much planned for tomorrow either, I have to wait in for someone to come and lower my shower pole for me. Its too high for me to reach when I’m sat on the stool and I can’t raise my arms above my head for too long.

I still feel extremely exhausted so another day of rest is probably a good plan. I don’t get too bored staying in these days, mainly because of the dogs but I’ve really got into gaming and all my Lego I have now. I have more hobbies and things I like to to, whereas in the past I hated being bored because I never knew what to do, I didn’t have much to do. I’m able to focus myself more now into a specific task. I hate being bored, it really effects my mood and makes it really low. 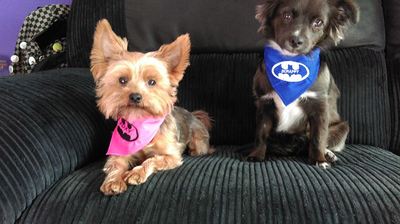 Both my babies have bandanna’s now 😀 they look so cute!

Anyway that’s all for now, I need to rest my eyes from this screen.

← Happy, content and refreshed
Over did it – catch up →