Today I had my testosterone shot, I was meant to have it done at the doctors surgery but I got there and my appointment had been cancelled!! I was so angry as I didn’t sleep well last night and I was rushing around to get myself ready. So I stormed out and I was like whatever I’ll do it myself.

Luckily when I got home, I had enough of everything to do the injection myself. The receptionist said they’d rang me but they fucking didn’t or I would of have a missed call! So absolute bullshit! But whatever I’ve done the shot now which is the main thing.

The thing I’ve noticed recently is that I can’t really control my anger, when I’m angry or frustrated it just comes out! I can’t hold in it, I can’t be polite to people. The rage just takes over, which isn’t great! But even with an awareness of if I still can’t seem to control it. I used to be able to control my anger and it used to take a lot to make me frustrated and angry but not since I started testosterone.

The only emotions I can really connect with at the moment is anger and depression, I don’t really feel anything else. I’m just so disconnected from myself and my emotions, which is a bit frustrating as I know I should be feeling things. An ex GF of mine from 7-8 years ago killed herself and I know I should be feeling sad but I don’t feel anything, just numb, nothing. Yes sometimes when people die you can go into shock and feel numb, but I feel like this a lot, so I know its not shock. Sometimes when I go outside I purposely go out without enough jumpers on so I feel the cold, so I can feel something!

I don’t really know how to fix it other then have an awareness of it. Maybe it will get better after top surgery… but it might not.

That’s all I really have to say this week, it feels good to have written everything down and got it all out. 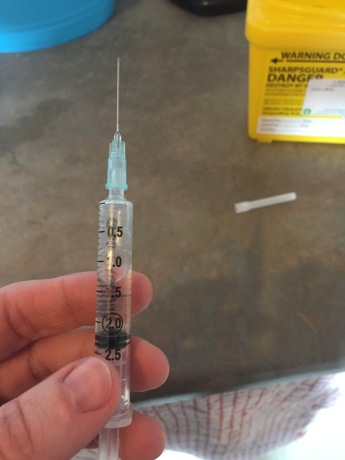